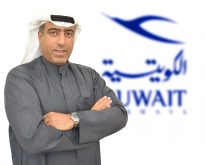 ​Kuwait Airways announced achieving positive results with the operation of approximately 1450 flights to and from the State of Kuwait, carrying almost 205,000 passengers to various destinations operated by the company during the winter period from 22 December 2022 to 7 January 2023. The three major destinations travelled by customers during the winter holiday season included London, Cairo, and Dubai with a punctuality rate of arrival and departure timings reaching approximately 90%. This also follows Kuwait Airways achieving third position in operational excellence, punctuality, and on-time performance in the Middle East and Africa, recording 81.64% of the 25982 flights that arrived on time during the year 2022.

In this context, Kuwait Airways CEO, Eng. Maen Razouqi stated, “We are pleased to have successfully operated 1450 flights during the winter season, carrying approximately 205,000 passengers to various destinations and in meeting the requirements of our valued customers. We have also been ranked third in the Middle East and Africa region for operational excellence, punctuality, and on-time performance for the year 2022. The Board of Directors and the Executive Management spares no effort towards the development of the company’s fleet, as we have recently received new aircraft with the latest technology present in the aviation industry, as well as numerous diverse features and services for the convenience of our valued customers. This ranges from comfortable seats and convenient services provided on board by our highly trained crew, to the speedy completion of travel procedures at Terminal 4, that are according to systematic plans and standards adopted by the company, in addition to the earnest efforts and expertise of national talents working at the company. Moreover, Kuwait Airways closely follows the requirements of our valued customers and conducts systematic research on the selection of new destinations.”

Razouqi concluded his statement by extending his sincere thanks and gratitude to the Blue Bird family for their efforts towards the company’s achievement during the winter period and for obtaining this position, while emphasizing on the commitment towards development of various services to achieve the highest levels of customer satisfaction.

On his part, Kuwait Airways Chief Operations Officer, Captain Eisa Al-Haddad stated, “We are pleased to announce the company’s achievement during the winter season, while confirming our complete readiness for the 2023 summer period. Kuwait Airways is committed towards safety and security of its aircraft through periodic maintenance for its fleet, while applying the highest standards and regulations set by international safety organizations and developing them at all levels to keep pace with international standards present in the air transport sector. Kuwait Airways strives to make security and safety of its aircraft and passengers among its foremost priorities and major objectives, through which the company has achieved various awards and recognition in this aspect. We are also committed towards ensuring the completion of convenient travel procedures for our valued customers. In addition, the selection of destinations is based on the requirements of our customers all throughout the year, including the winter and summer period, and considering the local and global market requirements.”

Al-Haddad concluded by emphasizing on Kuwait Airways’ endeavour to provide the latest developments which are in pace with the commercial aviation sector, subject to international standards, as well as meeting the requirements of passengers and providing them with the best services. He also extended his sincere appreciation to all those who contributed to the development of the national carrier of the State of Kuwait and commended the national workforce in the various sectors of the company for their efforts, especially during the previous period.