Travelport strengthened its partnership with Qantas on a new agreement that includes a commitment to continued collaboration on the future of distribution. Following the recent announcement of the launch of Qantas Channel on August 1, 2019, which will allow agents to access content sourced from the NDC-enabled Qantas Distribution Platform, Travelport’s Managing Director of Australia and New Zealand, Scott Barber, said, “We are delighted to support Qantas as it develops its new channel and introduces the NDC standard. As the first GDS operator with an NDC booking solution available to a small group of customers, we have proven our capability to deliver this new standard. We are supporting our customers as they prepare for this new distribution era to ensure it provides seamless, integrated travel choice through access to the broadest range of content. I’d like to thank our customers for collaborating with us as we deliver the new Qantas Channel and NDC solutions which make the process of buying and managing travel better for everyone.” Commenting on the airline’s new distribution model, Vanessa Hudson, Chief Customer Officer, Qantas said the airline was pleased to be working with Travelport to make the Qantas Channel available to their agents globally. “The digital environment has changed the way we need to work with our trade partners, and our new technology paired with this new Qantas Channel agreement will support us on the journey to delivering our vision for our mutual customers. We’re excited to continue to innovate with our trade partners and share in the benefits of this new technology.” Travelport recently outlined its 2019 NDC roadmap after the successful onboarding of the first group of travel agencies to receive access to NDC content … 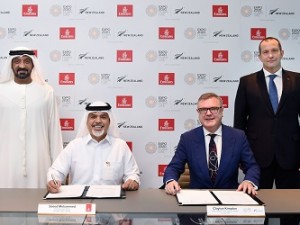 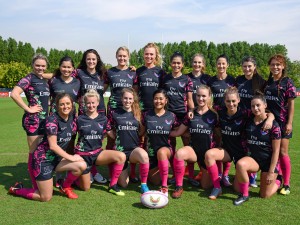 The 2018 Emirates Airline Dubai Rugby Sevens is underway at The Sevens Stadium. Now in its 49th year, the event is set to be the largest event on record with over 930 rugby and netball matches across three days and enhanced entertainment for everyone. During the Dubai Sevens, Emirates will be bringing the Rugby World Cup and will be displaying it at its hospitality for guests and fans. After six months of training, drills and preparation, the EK Firebirds, an all-women’s rugby club comprising Emirates Cabin Crew from 14 different nationalities, is ready to compete at the 2018 edition of the Emirates Airline Dubai Rugby Sevens invitational women’s tournament. The EK Firebirds squad met with the USA Women’s Eagles, the national sevens rugby team, for a mini-training camp ahead of the tournament, where they ran through practice scrums, along with kicking and tackling techniques and exercises. The EK Firebirds team members come from rugby loving nations including the UK, Australia, New Zealand and South Africa, as well as other diverse nations like Romania, Slovakia, the Czech Republic, Namibia, the Philippines and Nigeria – reflecting the multicultural Cabin Crew team at the airline and the global make-up of Dubai. The team members have found time to practice and train during their busy travel rosters, and organise themselves to ensure that as many of them train together as possible, using the Sevens stadium, Zaabeel Park and other venues in Dubai as their training grounds. 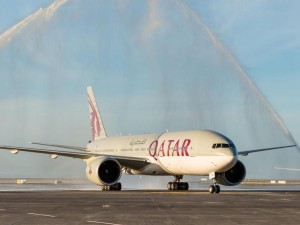 Qatar Airways has launched its new record-breaking Auckland service on one of the country’s most significant days of the year – Waitangi Day. It was the first Qatar Airways flight to touch down on the North Island of New Zealand. Auckland is the first city in New Zealand to be served by Qatar Airways and will provide a gateway for travellers to visit the stunning country, which is famous for its spectacular coastlines and lush forest landscapes. Celebrations to commemorate the launch of the world’s longest commercial flight, which takes 17 hours and 30 minutes and covers a distance of 14,535 kilometres, began at the airport with a traditional water salute as the Qatar Airways Boeing 777 taxied down the runway. The new daily flight to Auckland is served by a Boeing 777, which has a two-class configuration with 42 seats in Business Class and 217 seats in Economy Class. Passengers travelling on board the Qatar Airways Boeing 777 to and from Auckland in Business Class can enjoy one of the most comfortable fully-flat beds in the sky with 78 inches of seat pitch. In addition, the on-demand à la carte menu service allows Business Class passengers to order anything from the menu at any time during the flight. The aircraft also features the airline’s award-winning Oryx One entertainment system, offering up to 3,000 entertainment options on individual Qatar Airways Group Chief Executive, His Excellency Akbar Al Baker travelled on board the inaugural flight from Doha to Auckland and was welcomed by The Hon Todd McClay, New Zealand’s Minister of Trade and State Owned Enterprises; and Auckland Airport Chief Executive, Adrian Littlewood. H.E. Al Baker said: “The launch of our …