Emirates redeploys A380 on Dubai-Narita route 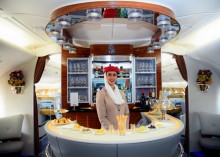 Emirates will resume its flagship A380 service between Dubai and Narita from March 26, 2017. This follows the airline’s recent A380 deployment to Moscow, and will take place after the upcoming launch of A380 services to Johannesburg. It will also coincide with the launch of A380 services between Dubai and Casablanca. Emirates will deploy its three-class A380 on the Narita route, offering a total of 489 seats, with 14 private suites in First Class, 76 mini pods with lie-flat seats in Business Class and 399 spacious seats in Economy Class, increasing capacity per flight by more than 135 passengers compared to the current Boeing 777-300ER. Flight EK318 will depart Dubai at 02:40 and arrive in Narita at 17:35 daily. Return flight EK319 will depart Narita on Monday, Thursday, Friday, Saturday and Sunday at 22:00 and arrive in Dubai at 04:15 the next day, while on Tuesday and Wednesday, it will depart Narita at 21:20 and arrive in Dubai at 03:35 the next day. All times are local.
Narita will join more than 40 destinations on Emirates’ extensive global network served by its A380 aircraft, including Paris, Rome, Milan, Madrid, London and Mauritius. Emirates currently operates a three-class Boeing 777-300ER aircraft on its daily flights between Narita and Dubai. The resumption of Emirates’ A380 service to Narita makes it possible for Japanese travellers to fly only on A380s to their final destinations, particularly when travelling to European cities, via Dubai.