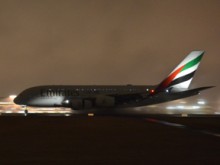 Emirates carried over 3.9 million passengers in its 15 years of service to Japan. In October 2002, Emirates became the first airline to link Japan and the Gulf region with non-stop flights when it introduced its four-times-per-week service to Osaka. The number of passengers carried in Emirates’ first year of operations–roughly 66,000 in 2002—has grown to nearly 530,000 passengers carried between Dubai and Tokyo (Narita and Haneda) and Osaka in 2016.

Adapting to demand in terms of both quality and volume, the airline continues to enhance passenger experience in Japan. The opening of the Emirates Lounge at Narita (Tokyo) in 2015 and the introduction of the A380 to Narita in 2017, which increased capacity by more than 135 passengers per flight, are most notable.