RwandAir partners with Kiza to promote Africa in the UAE

It was a great evening at the Kiza Restaurant & Lounge in Dubai International Financial Centre (DIFC), Dubai during the African Market, an event that was held to promote emerging Pan-African businesses. RwandAir took the opportunity to showcase their products and services to the local and expat community in Dubai. Timothy Njihia, Area Manager for RwandAir, stated that this was a great place to engage potential and existing RwandAir customers.  To support the event further, RwandAir had in place two return economy class tickets from Dubai to any destination in the RwandAir network to be awarded to two winners participating in the African Market, an opportunity to experience to fly the dream of Africa, as the airline’s tagline says. 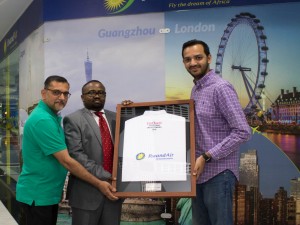 It was the second consecutive year that RwandAir sponsored the EmQuest Cricket Mania event recently with other partners such as Turkish Airlines, Seychelles Tourism Board, Millennium Hotels Dubai, Flexible Autos etc. The two-day event saw a total of about 800 participants from the travel trade which included players, spectators etc. EmQuest Cricket Mania is a large scale event that witnesses the coming together of travel management giants in the industry to compete against each other for the ever rolling trophy. Built on the success of the previous year, EmQuest, a division of Emirates returned with their annual cricket championship tournament EmQuest Cricket Mania 2019 for all Sabre users across the UAE. With Turkish mega carriers, Turkish Airlines as the platinum sponsors and the fast rising giants in the aviation industry — RwandAir as the gold sponsors of EmQuest Cricket Mania 2019. Kanoo Travels were announced as the winners of EmQuest Cricket Mania 2019 and dnata emerged as the runners up. Timothy Njihia, Area Manager, RwandAir,  stated, “RwandAir has been a consistent sponsor of EmQuest’s Cricket Mania tournaments for the last two years, as the T-Shirt Sponsor and in 2019 as the Gold Sponsor. We sponsor the tournament during the event days, that is, the two  weekends that the tournaments last.  This partnership is very important to us as it is a top-of-mind brand awareness to the travel trade, with trade engagement through sports, that is, cricket in order to strengthen partnerships between stakeholders RwandAir, EmQuest & the travel trade. 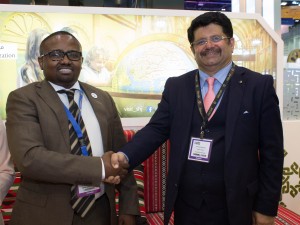 RwandAir has recently appointed Cozmo Travel as its Passenger General Sales Agent (GSA) for the GCC countries (Oman, Bahrain, Kuwait and Saudi Arabia (Offline). “These strategic partnerships play a very important role especially for airlines entering new markets and the practice is that airlines look competitively for established and well known GSA’s when entering particular markets which saves airlines associated costs for new market entry and, or development such as infrastructure, human resource etc while focusing on results. We are already established in the UAE, flying into and out of Dubai and we do cover the entire UAE market from a passenger and cargo sales perspective. This partnership is part of a growth strategy, though offline and it gives us an opportunity to assess the GCC markets for any other decisions in the future,” stated  Timothy Njihia, Country Manager—UAE | GCC | Pakistan, RwandAir.” Jamal Abdulnazar, CEO, Cozmo Travel stated, “With Cozmo Travel’s extensive retail presence in all the GCC countries, RwandAir will be able to capitalise on Cozmo’s  network in the region ensuring a wider market reach. Likewise Cozmo will be able to represent and sell the various RwandAir destinations within the African continent as well their expanding network into Asia and Europe. With a significant population of African nationals working and residing in the GCC region, the focus will be to capitalize on the large network of destinations within the African continent served by RwandAir.”