7 carriers from the Middle East suspend flights to Doha 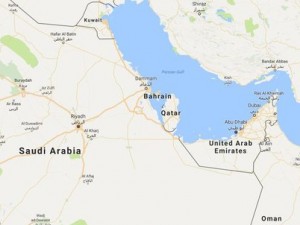 In keeping with the recent instructions from the governments of UAE, Saudi and Bahrain, seven carriers from the various Middle East countries have suspended their services to Doha with effect from June 6, 2017 until further notice. Among these airlines are Royal Jets, Etihad, Emirates, flydubai and Air Arabia from UAE; Saudia from Saudi and Gulf Air from Bahrain. While Etihad, Emirates and flydubai suspended all flights between Dubai and Doha, Royal Jets suspended their services between Abu Dhabi and Doha and Air Arabia suspended their flights between Sharjah and Ras al Khaimah and Doha. Saudia has suspended its flights between Saudi and Doha and Gulf Air between Bahrain and Doha. So all customers who have booked tickets on any of these airlines for flying to Doha will have to contact the airlines for alternative options, which will include full refunds on unused tickets or free re-booking to the nearest alternate destinations. For detailed information, the relevant airlines can be called or their websites can be looked up. 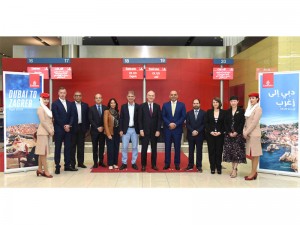 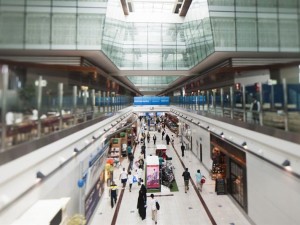 Emirates’ customers can explore more of Dubai this summer by enjoying exclusive offers and discounts across the city with My Emirates Pass, which turns the Emirates boarding pass into an exclusive membership card. Those flying to or through Dubai between June 1 and August 31, 2017 can take advantage of a range of offers at some of Dubai’s best known hotspots by simply showing their Emirates boarding pass and a valid form of identification. My Emirates Pass gives customers special discounts at over 120 world class restaurants and hotel dining outlets in Dubai. Exclusive offers are also available on a range of leisure activities, including visits to championship golf courses, thrilling theme parks or luxury spas across the city. Furthermore, My Emirates Pass can be used to enjoy some of the city’s must-see new attractions, such as Dubai Parks and Resorts, which features three theme parks: Bollywood Parks™, MOTIONGATE™ and the region’s first LEGOLAND® Park and LEGOLAND® Water Park.

Emirates’ new First Class to be unveiled in November 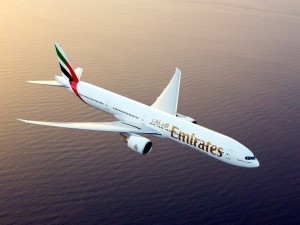 Emirates confirmed that its new First Class product will be showcased at the Dubai Air Show in November. Making its debut onboard a Boeing 777-300ER, Emirates’ new First Class cabin will feature 6 private suites laid out in a 1-1-1 layout, unlike the current structure of 8 private suites in a 1-2-1 layout on its existing 777 vessels. Emirates will announce the destinations where the new Boeing 777-300ER would be deployed in due course. Sir Tim Clark, President, Emirates Airline, said, “Our products and services across cabin classes are continually improved and enhanced. But what our customers will see on Emirates’ new 777s starting from November will be a much bigger revamp that takes our onboard experience to the next level. All cabins will sport a totally fresh new look. We are excited to showcase the results of years of planning and development invested into our new First Class offering, and our overall Emirates 777 experience.” 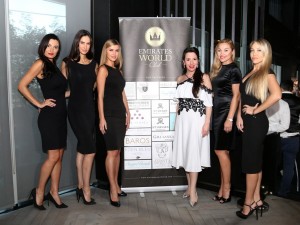 Emirates World Club, a VIP-lifestyle event management company offering customized  solutions for travellers and UAE elite residents has launched in the Emirates. Creating bespoke and exceptional journey for its high-end clientele, Emirates World Club held its first networking event at Gaucho Restaurant that was attended by key decision makers and senior management from various sectors in the UAE. It was a night of socializing highlighted by world-class entertainment. Emirates World Club offers its members the privilege to experience some of UAE’s most luxurious networks of hotels, bar and restaurants, transportation, health and beauty services etc. Romika Fazeli, also the founder of RF Event & Model Management, a Dubai-based full service event planning and model/hostess management company, Emirates World Club was formed out of the successful events managed by RF Events for its clients in the oil and gas, marine, railway, luxury automotive, luxury retail and construction sectors. “One of the most important elements of RF Events over the past 10 years has been the development of a comprehensive list of over 6,000 senior managers and directors across different industries. Along with hosting the events for this varied clientele, I have developed great friendships with them so when they need assistance while visiting, moving, staying or operating in the UAE, they call my company to assist them. Thus the idea of establishing a VIP-lifestyle event management came into mind.  We provide exclusive services to the world’s elite. Our mission is to satisfy our members’ search for a more comfortable, worry free and luxurious life and an unforgettable experience for travelers whether booking a restaurant, bar and club, assisting their travels abroad or when relocating and even personal shopping. Our large variety … 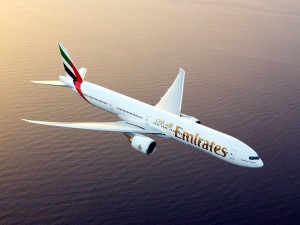 Emirates will commence its scheduled daily flight between Dubai and Zagreb, expanding the airline’s network and further strengthening ties between the UAE and Croatia.Months of planning have paved the way for the launch of Emirates’ new service to Zagreb next week, which sees Croatia become the airline’s 39th destination in Europe. The new route will be an important one for Emirates as it will further strengthen the airline’s European footprint and tap into a new part of the continent – the south eastern part – thanks to Zagreb’s central location at the crossroads of Central Europe, the Mediterranean and the Balkans. Both business and leisure travellers from around the Emirates network will be able to enjoy the airline’s award-winning product and service on board the three-class Boeing 777-300ER offering a choice of eight Private Suites in First Class, 42 lie-flat seats in Business Class and 310 spacious seats in Economy. The new Zagreb flight is expected to boost the growing tourism demand for Croatia from around the Emirates network, especially the Middle East and Asia Pacific and also offer a convenient option for visiting friends and relatives travelling in from Australia and New Zealand. In just the month of June alone, Emirates has received bookings for flights to Zagreb from passengers originating from no fewer than 36 different countries around the world.

Emirates A380 second daily to Birmingham from October 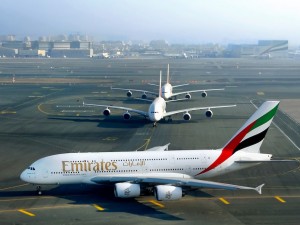 Emirates will be introducing a second daily A380 service between Dubai and Birmingham, beginning October 29, 2017. Flight EK39/40, currently operated by a Boeing 777, will now be operated by the Emirates A380, adding to the existing daily A380 already operating on the route. This means that from October, the airline will operate a twice-daily, all-A380 service to the Midlands. Emirates’ decision to use a double-daily A380 service was in part driven by huge demand from passengers to travel on the iconic aircraft. Since the first A380 service from Dubai to Birmingham launched on March 27, 2016, over 300,000 passengers have already flown on the aircraft between the two cities. The A380’s popularity is partly due to the fact that it features the widest individual in-seat economy class screens in the industry, measuring in at 13.3 inches and offers over 2,500 channels on the inflight entertainment system. And with Emirates offering A380 services to a number of key destinations in the East such as Auckland, Bangkok, Beijing, Perth, Singapore and Sydney, passengers travelling beyond Dubai have an increased opportunity to fly on the A380 on both legs of their journey.

Emirates A380 services to Beijing and Shanghai from July 2017 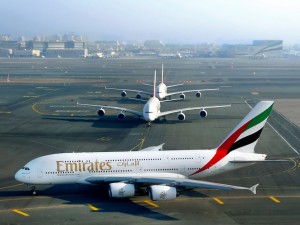 Effective from July 1 2017, Emirates will provide an all-A380 service on its Beijing (PEK) and Shanghai (PVG) services when it upgrades the second daily flights, EK308/EK309 on its PEK route and EK304/305 on its PVG route, replacing the current Boeing 777-300ER operations. The move will increase capacity to both Beijing and Shanghai, offering Emirates passengers even more seamless A380-to-A380 connections between the two Chinese cities and over 30 international points, including 18 points in the UK and Europe, via its hub in Dubai. This upgrade strengthens Emirates’ overall mainland China offering, which also includes services to Guangzhou, Yinchuan and Zhengzhou. The additional seats on the routes will support more business and leisure travel departing from and arriving in China, while offering passengers an exceptional global travel experience. The popular Emirates A380, which offers up to 519 seats in a three class configuration on Chinese routes, now flies to seven North Asian cities, including Beijing, Shanghai, Guangzhou, Hong Kong, Taipei, Seoul in South Korea and Narita, Japan. 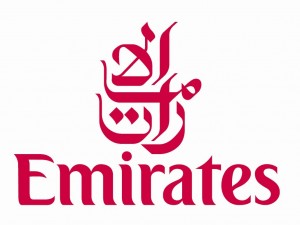 Emirates will introduce a third daily service to Brisbane, Australia from December 1,2017, complementing Emirates’ existing two daily services. The direct service, to be operated on a B777-200LR aircraft with eight seats in First Class, 42 in Business Class and 216 in Economy Class, will increase capacity on the route by 3,724 seats a week, inbound and outbound between Brisbane and Emirates’ hub Dubai. This will give passengers in the United Kingdom, France and North America greater access to Australia with just one stop in Dubai as part of Emirates’ global route network. The inbound service EK430 will depart Dubai at 22:00 hrs, arriving in Brisbane at 18:15hrs the following day. While the outbound flight EK431 will depart Brisbane at 22:25 hrs, arriving in Dubai at 07:00hrs the following day. The service will operate alongside two existing daily services to Dubai. Flights EK434 and EK435 operate non-stop between Dubai and Brisbane and onwards to Auckland, New Zealand, while flights EK432 and EK433 operate between Dubai and Brisbane via Singapore. Additionally, with codeshare partner Qantas, Emirates offers services to Singapore twice daily from Brisbane. The news comes as Emirates announced it would be upgauging its third daily service to Melbourne from a B777-300ER to an A380 operation from 25 March 2018, allowing passengers to travel aboard Emirates’ A380 on all three daily flights between Melbourne and Dubai. 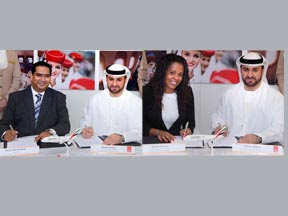 Emirates has renewed individual global marketing agreements with Mauritius and Seychelles in the form of Memorandum of Understandings with the respective tourism boards. The MoUs were signed by Orhan Abbas, Emirates’ Senior Vice President, Commercial Operations for Africa, Kevin Ramkaloan, Director of the Mauritius Tourism Promotion Authority, and Sherin Francis, Chief Executive Officer of the Seychelles Tourism Board in presence of Maurice Loustau-Lalanne, Minister for Tourism, Civil Aviation, Ports and Marine in Seychelles. Various joint activities will be developed under the agreement, such as attendance of tourism trade shows and fairs, trade familiarisation trips, product presentations and workshops. Emirates started operations to the Mauritius in September 2002 with three weekly flights. The daily A380 service was launched in December 2013, and the double-daily service was introduced in October 2014, following a strong demand for Emirates’ flagship aircraft on this route. In 2016, more than 1,200,000 tourists visited Mauritius. In June 2015, Emirates increased its capacity to the Seychelles, when it switched from the Airbus 330-200 used on one of the two daily services to a larger Boeing 777-300ER. The introduction of the Emirates Boeing 777-300ER, which operates as flight EK 705 from Dubai and as EK 706 on the return flight, increased the overall capacity on the route by 1722 seats per week and made the route an all-Boeing 777 operation.