The new system which has been characterized as a “Next Generation Air Traffic Management System”, will be one of the most advanced systems in the world. It’s specifications and functions are being applied for the first time in the world, ahead of the timelines set forth by the International Civil Aviation Organization (ICAO) to meet the Aviation System Block Upgrade modules as identified in the Global Air Navigation Plan. Once implemented, which is expected to be completed in mid-2020, the project will be a strong pillar of the country’s infrastructure and will represent a significant contribution to the advancement of the aviation sector and the country’s economy for the next 20 years. The system will include functions to support and enhance safety and efficiency, with a clear focus on the automation of many processes. It will also include the potential to enhance airport operations and will be environmentally friendly.  The system will help to save fuel and create an eco-friendly aviation system in the county through the exchange of flight information from pre-departure phase until the arrival gate at the destination airport.

His Excellency Saif Mohammed Al Suwaidi, the Director General of the General Civil Aviation Authority of the UAE, said, “We believe in continuous and sustainable investment in our aviation infrastructure to ensure safety and efficiency. which in turn enhances the security and economy of the UAE. The General Civil Aviation Authority of the United Arab Emirates has formed numerous strategic plans, to modernize, improve and upgrade the air navigation services. We are working hard with our strategic partners to standardize ATM systems, which will contribute significantly to improve air traffic operations”

“The implementation of the Next Generation ATM System targets the smooth flow of air traffic operations between the air traffic service units in the UAE and neighboring countries through increased automation for harmonization and interoperability” said Ahmed Ibrahim Al Jallaf, Assistant Director General of Air Navigation Services. He added “the collaborative efforts by the UAE GCAA at national and regional levels will lead to raising the efficiency of operations and improve the level and quality of air navigation services in the UAE”.

Alex Moya, General Manager of Indra in the UAE, said: “We feel very proud to have been bestowed with the trust of the General Civil Aviation Authority to rely on Indra’s extensive experience and its state of the art air traffic control automation system” and added “Indra’s technology will provide increased accuracy, enhanced air traffic safety and allow to manage a more cost efficient while environmentally sustainable operation to successfully address today’s and tomorrow’s continued demand of UAE’s airspace”.

The aviation industry contributes more than 14% of the UAE GDP.  The country has been witnessing a steady growth in air traffic movements ever since its inception as an FIR. This growth is expected to continue at a rate of 5 to 7% per year beyond 2030 and is forecasted to reach over 5,200 daily air traffic movements by 2030. 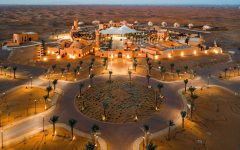