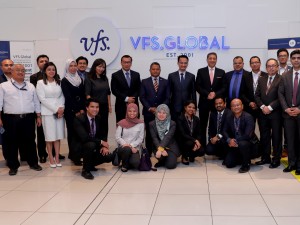 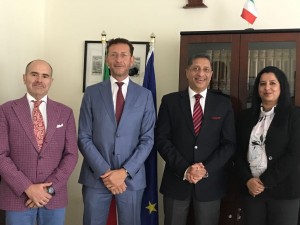 With an aim to bring greater efficiency in visa processing services for residents of Kuwait, the Embassy of Italy in the State of Kuwait has signed a contract with VFS Global to launch a proficiently managed and modern Italy Visa Application Centre in the city. VFS Global recently won the four-year contract after participating in an official tender published by the Embassy of Italy, Kuwait earlier this year. The contract was officially signed by H. E. Mr. Giuseppe Scognamiglio, Ambassador of Italy to the State of Kuwait, and Vinay Malhotra, Chief Operating Officer, Middle East & South Asia, VFS Global, at a signing ceremony held at the Embassy of Italy in Kuwait, on September 6, 2017. Also present at the signing was Patrizio Dell’Arte, Head of the Consular Office of Italy in the State of Kuwait and Marita Bachhav, Head of Operations – GCC, Lebanon, Jordan & Iraq, VFS Global. The new centre, scheduled to launch in November 2017 will be located at Level 54, Arraya Tower, Al Shuhada Street, Sharq, Kuwait, and will allow travellers to Italy from Kuwait submit visa applications and enrol biometrics in a comfortable, convenient and professionally managed environment. At the centre, in addition to their visa application process, applicants will also have access to a dedicated tourism space, which will offer tourism information on a range of hand-picked tours in Italy. 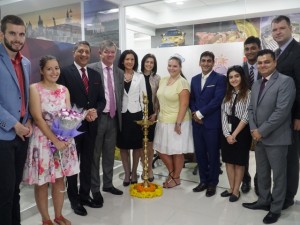 Monika Palatková, Managing Director, Czech Tourism, has announced a partnership with VFS Global in order to enter the GCC market. She says, “We have been working closely with VFS Global in India since the end of 2016 and it has proven to be successful in establishing the Czech Republic as a tourist destination in India. I am pleased to announce the expansion of our cooperation into another strategic region, the Middle East. Today, we have entered into a contractual partnership, based on which VFS Global will implement several promotional activities focused on the leisure and MICE segments in the Middle East.” She added, “Prague, the beautiful capital city of the Czech Republic, is extremely popular with tourists but there is so much more this wonderful country has to offer the discerning Indian travellers. The central promotional theme of Czech Tourism in 2017 has been Baroque. The year 2018 will be a period of celebration for the Czech Republic because it marks 100 years from the establishment of the independent country; the main focus will be monuments, places and traditions related to this period.” 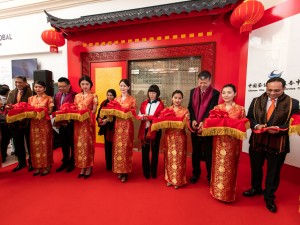 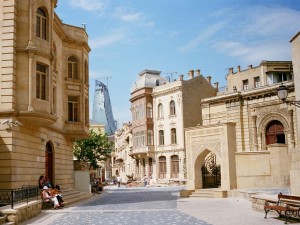 Azerbaijan has simplified its visa process by granting it online for citizens of 93 countries. Travellers will now be able to obtain visas to Azerbaijan within three hours, be it a weekend or a holiday. “This resolution will increase the tourists flow to the country not only for the beautiful autumn season but also for the rest of the year.” Rashid AL Noori, Chairman, Representative Office of the Ministry of Culture and Tourism of Azerbaijan in GCC Chairman said. He noted that the influx of tourists to Azerbaijan increased by 15 -20 percent this summer, compared to the same period of last year. Arab tourists take the first position among tourists visiting Azerbaijan, followed by travelers from Russia. In July only, 330,000 people visited the country, and we anticipate that the figure will go up significantly, considering we have direct flights from Kuwait, Qatar and Dubai and we expect to inaugurate direct flights from Jeddah in Saudi Arabia to Baku soon.” The decision comes as a positive gift to the visitors in GCC who love the country for its proximity and wish to visit more often on different purposes beyond its exquisite nature and Culture. 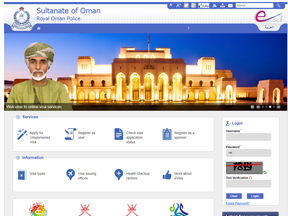 In an aim to encourage more and more international tourists to visit the country, the Sultanate of Oman has made the visa application process easier by launching eVisa service. Tourists planning to visit Oman can now apply online for visas at https://evisa.rop.gov.om/. They would only need to fill up a form online, attach the necessary documents and then pay the application fee by a credit card, through a Global Payment Gateway that is officially certified by Oman. The applicants would then be notified about the developments on their application through emails. The first stage comprises non-sponsored tourist visas for people from 67 countries and GCC residents employed in 116 professions. The eVisa system will allow Oman to receive more tourists from key markets such as China, Russia and the US, and drive the demand for experiential travel to the Sultanate. “The Sultanate’s announcement of the eVisa system will ensure continuous growth of Oman’s tourism sector in the coming years as this provides not only tourists but also investors, businessmen, researchers and students easier access to visa processing,” said Salim Adi Al Mamari, Director General of Tourism Promotion, Ministry of Tourism, Oman. 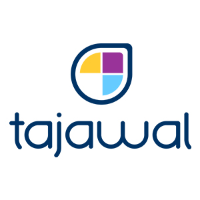 After its successful attempt at integrating the Visa Checkout facility with its tajawal.ae domain in January 2017, the Dubai-based travel-booking website has further collaborated with Visa to provide Visa Checkout to its customers in the Kingdom of Saudi Arabia. tajawal is now rolling out the service across multiple markets to provide its users in the region with the most convenient booking process possible. Visa Checkout offers cardholders a simple and secure digital payment method that allows for registered users to complete their purchase at the click of a button. By logging into their Visa Checkout account, payment and billing information are automatically populated, eliminating the step to manually enter the information with every purchase. Ahmed Gaber, Visa’s General Manager for Kingdom of Saudi Arabia, Kuwait, Oman and Bahrain, said, “Innovations like Visa Checkout help to remove friction from the e-commerce payment process, bringing significant benefits to both the customer and the merchant. With Visa Checkout integrated into its systems, tajawal can now offer its customers an online payment experience that is as easy, convenient, and seamless as swiping a Visa card in a traditional retail setting.” To promote Visa Checkout as a payment option on tajawal.sa, a special offer has been introduced on all flight and hotel bookings that can be availed by registered users who choose to pay with Visa Checkout on tajawal.sa until August 18, 2017. 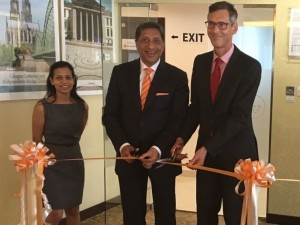 The Embassy of the Kingdom of The Netherlands in Abu Dhabi launched a new Visa Application Centre in Abu Dhabi enhance accessibility and greater convenience to residents of the United Arab Emirates (UAE) who plan to travel to The Netherlands. Applicants can visit the centre in Abu Dhabi, managed by VFS Global, to submit visa applications and enroll for biometrics in a comfortable and efficient environment. The new center, formally inaugurated by H.E. Frank J. M. Mollen, Ambassador of the Kingdom of The Netherlands to the United Arab Emirates, offers applicants streamlined and quicker visa application services managed by the center’s well-trained and specialised staff. Abu Dhabi is the second city in the UAE, after Dubai, from where applicants can apply for a visa to The Netherlands. The center is centrally located at Level 25, Shining Tower, Mubarak Bin Mohammed Street, Adjacent to Khalidiyah Mall, Abu Dhabi. VFS Global serves a total of 22 client governments in Abu Dhabi, and has operated visa processing services in the city since 2004. 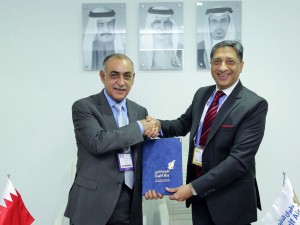 Gulf Air, the Kingdom of Bahrain’s national carrier, partnered with VFS Global, the largest visa service provider in the world, to facilitate visa issuance for passengers flying to the Kingdom of Bahrain. The online visa facility will launch this summer on gulfair.com. Signing the agreement with VFS Global, Gulf Air Chief Commercial Officer, Ahmed Janahi, said: “We are partnering with VFS Global to provide a much needed service to Gulf Air passengers that will support our national carrier’s longstanding efforts to promote the Kingdom as a destination to a broad spectrum of travellers while making the process of obtaining a visa to Bahrain easier and more convenient. Soon, Gulf Air passengers will be able to easily obtain short term visit visas to Bahrain via our website gulfair.com – allowing them to come to Bahrain and experience all that our Kingdom has to offer in terms of tourism, business opportunities and more.” Said Zubin Karkaria, Chief Executive Officer, VFS Global Group, “Integrating next-generation convenience into the traditional visa process lies at the heart of our services. We are pleased to synergise our efforts with Gulf Air and the Government of Bahrain to ensure greater flexibility and digital-friendly services for visitors to Bahrain, while maintaining the security requirements of the visa process. We believe the online e-visa platform will make visa application much more convenient for Gulf Air customers, providing them with greater speed and transparency in the process, thereby enhancing their overall experience.” Added Vinay Malhotra, Chief Operating Officer – Middle East & South Asia, VFS Global, “Applying for an eVisa through our dedicated online platform, designed exclusively for Gulf Air passengers, will transform the visa application experience for passengers, offering … 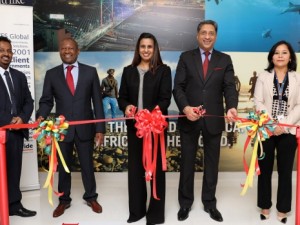 The Embassy of South Africa launched a South Africa Visa Application Centre in Dubai. Services at the centre commenced on February 1, 2017, but the centre was officially inaugurated by H.E. MK Lekgoro, Ambassador of the Republic of South Africa to the United Arab Emirates, at a ceremony held on February 28, 2017. The centre is situated at WAFI Mall, Level 2, Falcon Phase 2, Umm Hurair 2, Dubai. With South Africa being a popular travel destination for business and leisure travellers the world over, the streamlined and professional services offered at new centre aims at providing residents of the UAE elevated levels of customer service when applying for their visas. Well-trained staff with local language capabilities deliver personalised attention to applicants for a smoother and more convenient application experience. Speaking at the inauguration, H.E. MK Lekgoro, Ambassador of the Republic of South Africa to the United Arab Emirates, said, “It is with great pleasure that I formally inaugurate the South African Visa Application Centre in Dubai, which finally formalises our long standing relationship. This will add to the streamlining of much valued services to the public who we are sure will receive the best services in a professional manner.” Vinay Malhotra, COO – Middle East & South Asia, VFS Global, added, “We at VFS Global are committed to providing world-class visa application services on behalf of our esteemed client government, the Government of South Africa, to the residents of the UAE. We are confident that the newly launched centre in Dubai will add to the overall experience of travelling to the vibrant country of South Africa and are privileged to be a part of this new initiative.”