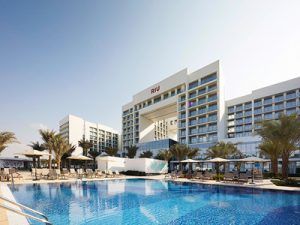 Riu Dubai, Nakheel’s 800-room joint venture with Spain’s RIU Hotels & Resorts, is now open at Deira Islands, adding a new dimension to Dubai’s hospitality offering as the emirate’s first 4-star, 24-hour all-inclusive beachfront resort.  Riu Dubai, Nakheel’s first hospitality joint venture and the first attraction to open at Deira Islands, was inaugurated by Nakheel Chairman, HE Mohammed Al-Shaibani and Luis Riu, Chief Executive Officer of RIU Hotels & Resorts. HE Mohammed Al-Shaibani, Chairman of Nakheel, said, “Nakheel has a long, successful history of creating and delivering a diverse range of tourism and leisure projects in line with government goals, and I am delighted to see our first hospitality joint venture come to fruition. The opening of Riu Dubai is a key milestone for Nakheel, Deira Islands and Dubai, and underlines our commitment to partnering with reputable, international brands to bring new and unique tourism concepts to the emirate.” Luis Riu, Chief Executive Officer of RIU Hotels & Resorts, said. “This is a unique opportunity to offer all our experience with the 24-hour all-inclusive product – so popular among our European and American customers – in a completely new destination. We undertook this enterprise with Nakheel, the best partner you could imagine thanks to its extensive experience in master developments and large-scale destination projects, and its firm commitment to Dubai’s tourism sector.” Issam Kazim, Chief Executive Officer of Dubai Corporation for Tourism and Commerce Marketing (Dubai Tourism), commented,  “The Riu Dubai is yet another development of distinction by our key partner Nakheel that will contribute towards the growing momentum in the hospitality sector and add to the city’s diversity of offerings designed to enhance the global appeal of Dubai as … 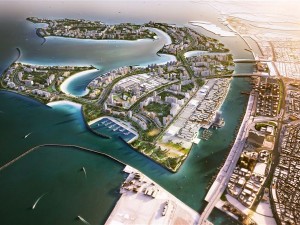 A joint venture between Nakheel and Spanish hospitality group–RIU Hotels & Resorts–has moved a step closer with the release of a construction tender for an 800-room, beachfront resort and water park at Deira Islands. With an investment value of AED670 million, the resort – RIU’s first in the Middle East and one of the biggest in Dubai in terms of hotel rooms – is set for delivery in Q4 2019. The RIU resort at Deira Islands will bring a new hospitality concept to Dubai, offering mid-scale, family-orientated, all-inclusive beachfront accommodation. Located at a prime beachfront plot at Nakheel’s new, 15.3 sq km Deira Islands coastal city, the resort will feature seven F&B outlets, three swimming pools, a fitness complex, children’s club and water park. Several new attractions, including Deira Mall, Deira Islands Night Souk and Deira Boulevard, are nearby. The joint venture is one of 18 projects in Nakheel’s AED5 billion hospitality expansion programme, which will deliver 5,800 new hotel rooms and apartments across Dubai in line with the Government of Dubai’s tourism vision for 2021. RIU Hotels & Resorts has almost 100 hotels, with around 45,000 rooms between them, in 19 countries. Together, these welcome over four million guests a year and provide jobs for nearly 27,000 people. RIU is one of the most popular hotel chains in the Caribbean and the second largest in Spain in terms of revenue. Nakheel has already awarded over AED7 billion worth of contracts at Deira Islands, with more on the way. The waterfront city, which is expected to have a population of 250,000 and to create 80,000 jobs, will add 40 km of coastline, including 21km of beach, to Dubai.

Nakheel and RIU to develop resort at Deira Islands 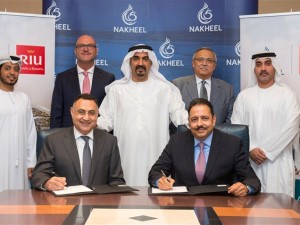 Nakheel and Spanish hospitality group RIU Hotels & Resorts (RIU) have commenced the development of their AED900 million, 800-room joint venture resort and waterpark at Dubai’s Deira Islands. The partners have appointed international consultants Dar Al Handasah to oversee design, engineering and construction supervision of resort — the first all-inclusive 4-star concept in Dubai and RIU’s first property in the GCC.  Nakheel and RIU signed their joint venture agreement in Palma, Mallorca, in February this year.  Set on a 3.4 million square foot plot at Deira Islands, the sprawling resort – one of the biggest in Dubai in terms of rooms – will boast four swimming pools, a kids’ club, spa and fitness centre. Dining facilities include an all-day restaurant, a speciality restaurant, four beach eateries and an evening dining area with a stage for live shows and entertainment. A construction tender is expected to be released by the end of 2016, with anticipated completion in Q3 2019. There will also be a waterpark occupying 10 per cent of the overall area. The new resort represents a significant step forward in creating a new range of affordable, family resort-style hotel accommodation in line with the Government of Dubai’s tourism vision for 2021.