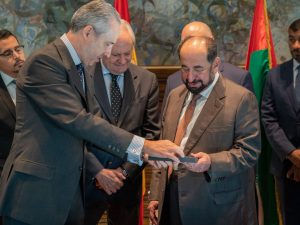 His Highness Sheikh Dr. Sultan bin Muhammad Al Qasimi, Member of the Supreme Council and Ruler of Sharjah, is currently on a cultural visit to the Spanish capital. On October 8, he was at Casa Árabe Madrid, which has been operating as the strategic centre for Spain’s relations with the Arab world since 2006. The Sharjah Ruler was received by Pedro Martínez-Avial, General Director, Casa Árabe, and senior representatives of Spanish cultural and academic institutions. The Sharjah Ruler witnessed the signing of a MoU between Sharjah Book Authority (SBA) and Casa Árabe, to promote Emirati and Arab cultures in Spain. It was signed by HE Ahmed Bin Rakkad Al Ameri, Chairman of SBA and Pedro Martínez, in the presence of heads and senior officials of both Emirati and Spanish cultural entities. The MoU seeks to achieve the goal of building bridges and strengthening bilateral relations to promote cooperation in key cultural sectors leveraged by Casa Árabe’s strong regional and international network. Under the agreement, the two entities will also work on executing agreed-upon programmes targeted at enhancing cultural exchange. They will develop a programme to promote cooperation between cultural entities in Spain, Sharjah and the UAE, and steer Spanish cultural experts to devising and applying effective tools to enhance dialogue and exchange between Sharjah, Spain and the world.