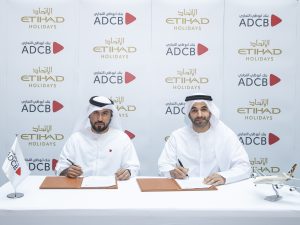 Abu Dhabi Commercial Bank (ADCB) and Al Hilal Bank signed an agreement with Etihad Holidays, which will provide customers of both banks an easy payment plan when booking an Etihad Holiday.  The signing ceremony took place at the Etihad Aviation Group headquarters in Abu Dhabi, between Mr. Hareb Almuhairy, Senior Vice President Destination and Leisure Management at Etihad Airways and Omran Taimour, Regional Head – Branch Banking from ADCB in the presence of senior officials from ADCB and Etihad Airways. Deepak Rochlani, Head – Retail Banking at ADCB, said, “The collaboration between ADCB and Etihad Holidays to introduce an easy payment plan for ADCB credit cardholders echoes our commitment to provide our customers with the most rewarding travel experiences.” Ian Hodges, Head – Personal Banking at Al Hilal Bank, said, “At Al Hilal Bank, the customer need is always first and with this new proposition we hope that we are inspiring and enabling people to travel more and explore the world while enjoying rewards and benefits that go beyond their expectations.” Hareb Almuhairy, Senior Vice President Destination and Leisure Management at Etihad Airways, said, “Etihad Holidays offers our guests the ability to enjoy rich travel experiences, and we strive to make this as accessible as possible for everyone. We are pleased to extend our partnership with ADCB and Al Hilal Bank to offer convenient payment solutions.”

Etihad Airways announced its partnership with Tourism Malaysia to attract visitors from Europe and the Middle East to Malaysia, via the airline’s Abu Dhabi hub. The agreement was signed at the World Travel Market in London, attended by representatives from both organisations and trade partners. The agreement between the two organisations will support the tourism board’s Visit Malaysia 2020 marketing campaign which has been developed to encourage tourism from Europe and the Middle East to Malaysia. Etihad Airways began flying to Kuala Lumpur in 2007 and has since flown 2.7 million passengers to the Malaysian capital. Today, Etihad Airways operates a daily flight to Kuala Lumpur which is operated by the airline’s Boeing 787 Dreamliner. Hareb Almuhairy, Senior Vice President Destination and Leisure Management, Etihad Aviation Group commented, “Tourism Malaysia has been a proud partner of Etihad for many years and Kuala Lumpur remains one of the most important destinations in our global network. The Southeast Asian country continues to be a popular choice for travellers in the UK and Europe as well as the Middle East, and visitors will benefit from the convenient connection through Abu Dhabi.” Datuk Musa HJ Yusof, Director General, Tourism Malaysia, said, “The campaign aims to welcome tourists from Europe, Middle East and beyond to Malaysia as well as to promote the Visit Malaysia 2020 initiative, which seeks to attract 30 million tourists and around RM 100 billion (GBP 18.56 Billion) in tourism receipts by the year 2020.” 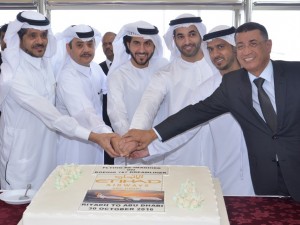