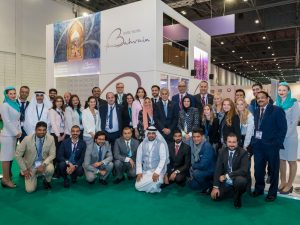 The Bahrain Tourism and Exhibitions Authority (BTEA) participated in the World Travel Market (WTM). Bahrain’s delegation was headed by the H.E. Zayed bin Rashid Alzayani, Minister of Industry, Commerce and Tourism, Nader Al Moayyed, Chief Executive Officer of BTEA and included representatives from BTEA, the Bahrain Economic Development Board, the national carrier Gulf Air, Bahrain International Circuit (BIC), as well as a number of leading hotels and travel agents. During this global event, BTEA showcased the Kingdom’s tourism potential as well as the upcoming Formula 1 Bahrain Grand Prix race, which has been attracting thousands of racing fans from around the world during the past 15 years. BTEA’s participation comes in line with its long term strategy to further develop the Kingdom’s tourism sector and strengthen its position on regional and international levels under the slogan of ‘Ours. Yours.’, which contributes towards the Kingdom’s economy and the 2030 Economic Vision. With the aim of making Bahrain a leading family and business tourism destination, the BTEA has developed an integrated schedule of events in order to attract tourists from around the world to the Kingdom of Bahrain. H.E. Zayed bin Rashid Alzayani, Minister of Industry, Commerce and Tourism, said “We have always been keen to participate in various regional and international exhibitions and events, through which we seek to promote the Kingdom of Bahrain to attract foreign investments and increase tourism numbers. Our strategy at BTEA focuses on strengthening the Kingdom’s tourism sector in order for it to become one of the main contributors to the economy.”